When I designed my recent DIY by GPS permanent 300 (over-distance at 340 km) <see here for a set of photos on my tumblr> I used the Strava route planning tool, which can be set to find most popular or least hilly routes between two points. I had already decided my control points, and chose to minimise climbing on the last leg between Lytham and Hebden Bridge. The other controls were Middleham and Sedbergh in North Yorkshire, and Glasson Dock and Fleetwood on the Lancashire Coast. What I didn’t realise was that the Strava tool would create a route so unusual in its variety of cycle provision. So although this wasn’t my intention, my overwhelming thoughts on this ride revolved around my experience of differing approaches to integrating bicycles with other modes of transport. Although I wasn’t really going anywhere, my ride became about the surfaces and widths of path and road, the attempts made to combine cars, bicycles and walkers, the absence and presence of signage – all the things that puzzle me daily as I ride from home to station, station to work on my Brompton.

So for the remainder of this post I will revel in the phenomenology of the road travelled, divided up by types of road that offered different experiences, whether emotional or practical, with a final section on my experience of other vehicle-types and users, including the animals I encountered alive and dead.

I rode them all, and much of my experience was determined by the presence or absence of cycle lanes, or indeed their nature (not all cycle lanes are created equal, see below). What I will say is that even the bits of A6 I had to negotiate were cycleable regardless of provision, and some of the A-roads were achingly beautiful and quiet even in the middle of the day. The oddest experience was the A-roads taking me back from Lytham to Hebden via the Lancashire towns of Preston, Bolton, Bury and finally Rochdale. Early evening they were full of taxi lunacy, but were fairly well appointed with cycle provision and the looming tower blocks of Rochdale were an evening highlight close to home.

The most pleasant surprise of my route was the shared-use provision through Lancaster (part of the Way of the Roses, see below) and Preston (the Guild Wheel). I fiddled extensively with this part of the route to minimise the use of such paths as my experience has been the surface is often unsuitable for a road bike, but left in some good lengths as an experiment and because there was no sensible alternative. I am delighted that I did  because although I struggled to find the starts of such routes at times (and the exits) these provided an experience similar to Dutch segregated long routes, with a rather better surface than I could have wished for. I experienced no difficulties negotiating broken glass, runners, walkers, dogs or slower cyclists, and left these paths with sadness.

The Way of the Roses runs from Bridlington in East Yorkshire to Morecambe in Lancashire, and is mostly quieter roads. Some of my route coincided with this route and I was impressed enough to think about doing the whole thing. Such routes have no obvious cycle provision in most places (although see above) 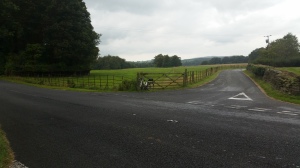 It sometimes feels like the most dangerous roads in Britain are its B-Roads, which have no cycle provision, may be narrow and permit high speeds. Most were fairly quiet and pleasant on this ride, and often provided a more scenic route, and minimised exposure to heavy traffic. I encountered a walker in high spirits in the Fylde on one who asked me how far I had to go. I think my response stumped him.

One of the most common irritations of route planning is where a physical or electronic map predicts there will be cycle provision and it is defunct (or unfindable). There is in principle a rather wonderful shared-use path from Fleetwood down the seafront past the Blackpool “entertainments” which I joined full of hope only to be dumped back on the traffic-light blighted main road past the tower and pleasure beach. Much of the path is out of use until the improvements to the seafront are complete in 2017, and even when I re-joined it I couldn’t figure out how to stay on it and foolishly joined the busy main road through the illuminations. This had its upside, but more on that below. The best example of a cycle path that wasn’t was when my Garmin took me down a dead end in Fleetwood and tried to route me down a clearly “no-cycling” footpath (obviously a popular illegal shortcut).

My most significant memory of an unclassified road on this route was the climb and descent of Park Rash. This is not a climb that forgives poor preparation or lack of determination, nor does it admit those that select too high a gear. I struggled with the loneliness and quiet on the ascent, although on the up-side of the climb visibility was good enough to be crushed by the sublime surroundings. No cars on the ascent, and two on the descent – no walkers either: and my going down was immersed in early-morning mist. No views, just the sheep, rabbits, grouse and other birds and mammals – including those dead from being hit by cars and one freshly killed by a bird of prey that was scared by my approach from its kill.

In general, although occasional encounters with cars and animals needed some care from me, these roads were straightforward to navigate but lonely. Road surfaces were generally poor, but by no means the worst of the ride.

Roads at odd times of day

The exemplar was riding from Hebden Bridge to and through Keighley before dawn. Quite an unusual experience as I would normally avoid riding through Keighley like the plague. Almost zero traffic, ghostly quiet. Like a disaster movie.

Oh the horror of them, too narrow, strewn with road debris and often parked in. Also, due to the time of year, full of nuts and seeds dropped by overhanging trees. Ugh.

I encounter these rarely, but was fairly impressed by some of the wider cycle lanes with a cross-hatched separator. Sadly the lack of traffic tends to mean they are full of debris, but at least they were wide enough to feel a bit further from heavy traffic.

I DON’T HAVE AN OPINION ON IT

Other road users (including fauna)

Riding early mornings tends to rouse the wildlife, and I was inundated with animals, and birds that are normally hiding from the noise of traffic. Sheep were the main feature of North Yorkshire (and trying not to hit them); plentiful road kill was in evidence (see above on Park Rash) but the really prevalent feature of the ride was the plague of tiny insects that I spent most of the day riding through. Something about the Indian Summer we are having brought out clouds of unidentifiable bugs which I could feel hitting my skin on the descents. The other really unusual experience was being held up through Blackpool by the horse-pulled carriages along the seafront. I was tired enough by that point to experience the beginnings of intense road rage: thankfully I escaped on onto the quieter A-road to Lytham.

Here are the .gpx files of the route split into sections between controls

Lytham to Hebden Bridge
Details of how to enter and plan a DIY Permanent are here. You have to join AUK to play, but it was a really interesting experience and one I would thoroughly recommend.