A handful of receipts to be stapled together and posted with a card to a man I have never met. That is the goal. And it is a good one.

Offshore wind farms in the distance make me ponder a future without fossil fuels: throughout the night I am haunted by Mad Max visions of a post-petrol world, the lack of traffic signalling a world dominated by pedal power and wind.

Rain in a park

In a park, on a path, as the rain steadily turns from annoyance into a heavy and unwelcome presence. The riding becomes dirty and sightless. All I can see is reflections from the water droplets on my glasses.

Peloton
George, embedded in the Ashford peloton, deep in conversation as Gavin and I drift on and off the back, enjoying the stimulation but unsure of the pace.

After the rain and the joy of an increasingly dry early morning, the gaps in our trio increase. We ride as increasingly silent and isolated units, becoming social only at the controls, but even here it is a grim task eating and drinking. 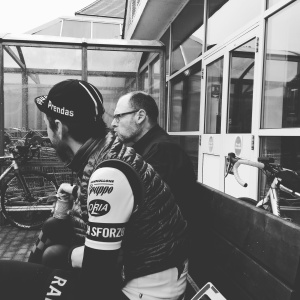 The volume and diversity of bird song after the deluge, even before the sky changed from black to blue is an assault on my ears. A seagull tells me we are close to the coast again, but I rarely see the sea.

Only Garmin could manufacture a device which guides you perfectly along a route until an unpredictable moment where it ceases to do so. It is like a map for spies, designed to destroy itself before capture.

Early on: a hill. Heart rate reaches 159 never to return. Later undulations register only as minor annoyances, slowing me down but making little impact on my increasingly depressed heart.

The joyless disappointment of the National Cycle Network – it is telling that the worst part of the route is dedicated to bicycles: what a sign of British failure.

After. It always comes back to me like a Stockhausen piece. In this case a mixture of Goldstaub and Sternklang. And maybe a bit of Stimmung.

And if you want to ride it: