Many learned minds have been debating the implications for professional cycling of the of the forthcoming Tour of Beijing. David Millar (@millarmind) suggested on twitter that some of the discussion was lacking Asian context:

Some discussion with @accidentobizaro led us to attempt to divine who will profit using the ancient Chinese oracle, the I Ching, and hence redress this ethnocentrism.  I stroke my long white beard of wisdom…

We asked: who will profit from the Tour of Beijing? Here are some excerpts from the reading (which is typically ambivalent):

The hexagram (24 – Fu) is called Turning Point and is associated with the following:

There will be a free course and progress. He finds no one to distress him in his exits and entrances. Friends come to him, and no error is committed. He will return and repeat his proper course. In seven days comes his return. There will be advantage in whatever direction movement is made.

More importantly, the moving lines were the first and last.

The first (bottommost) line, undivided, shows its subject returning from an error of no great extent, which would not proceed to anything requiring repentance. There will be great good fortune.

The topmost line, divided, shows its subject all astray on the matter of returning. There will be evil. There will be calamities and errors. If with his views he put the hosts in motion, the end will be a great defeat, whose issues will extend to the ruler of the state. Even in ten years he will not be able to repair the disaster.

So the first suggests whatever misdeeds have been committed are fairly inconsequential, whereas the top line suggests that we are in for some fireworks. I wonder which member of Global Cycling Promotions is the ‘ruler of the state’… 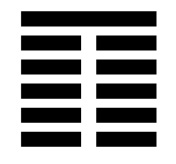 Just to make things complicated, the future is also hinted at in the hexagram that is moved to, 23 – splitting apart (my personal favourite):

It will not be advantageous to move in any direction whatever.

So, it’s a turning point moving to chaos…

Maybe… but who profits from all this…? GCP, UCI, China…? Or will it hasten the immolation of cycling as we know it.

Thanks to Facade for the reading: quotations above are from their online I Ching.